How many times have you heard it said that a modeller laboriously finished a conversion or a complex detailing job, only to discover a few months later that one of the AM guys is bringing out a set that would have made all that scratchbuilding unnecessary, or worse yet, that a good quality kit of the subject is about to burst upon the market?


Sometimes providence smiles and the goods come out before the project is finished, and that just happened to me. I was building Tamiya’s 1:48th scale F4U-1D with an eye to doing the rare multi-tone disruptive camo scheme of El Salvador, 1969, and I should have been done months ago except that real life got in the way (and I ran afoul of the wing fold mechanism and still haven’t lined up the right wing outer panel satisfactorily -- and maybe this was all actually for some higher cosmic purpose...)


I had meant to scrape by with national insignia from the old Hobbycraft kit of the same subject -- okay, they were the wrong shade of blue, but they were the only ones around. Then I suddenly thought about stencil data, and whether it would have been reapplied in Spanish when the aicraft went to Latin America. I checked with Aztec Decals in Mexico and they have Spanish Corsair data, as they do their Spanish Mustang data, but it turns out the very aircraft I was intending to build, FAS-219, is featured on a new decal: 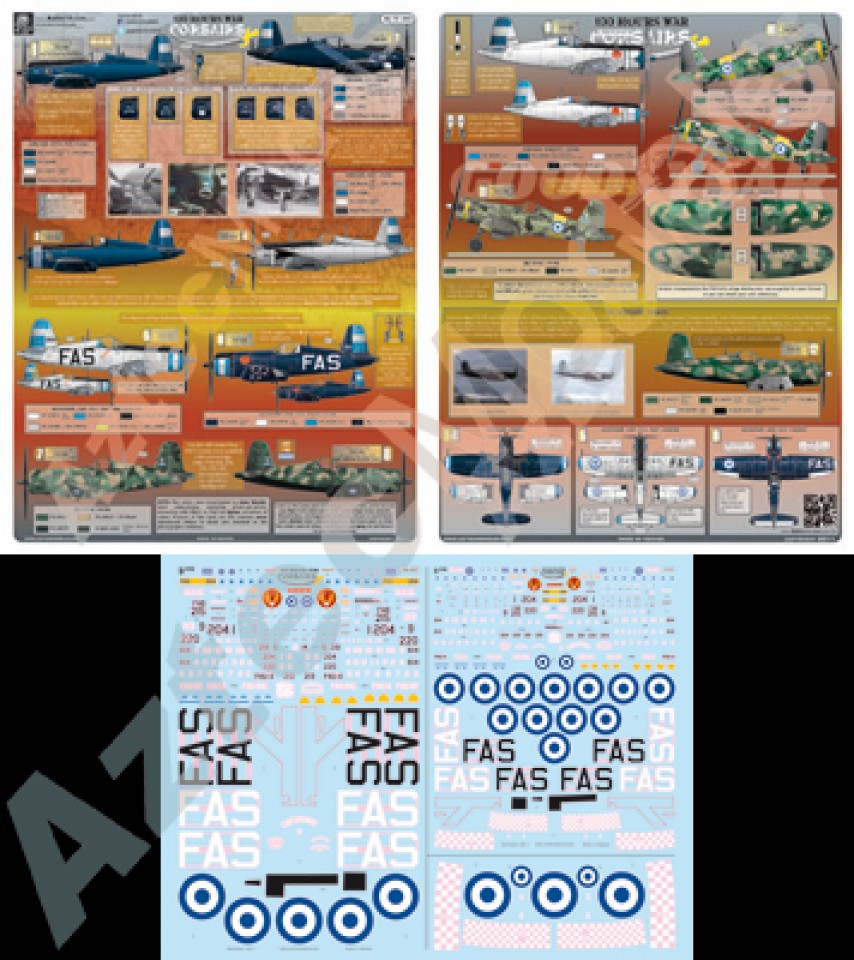 Weellll... Now there’s a spot of serendipity. If the wings had fit better and life had not so gotten in the way I’d probably have finished this animal by now, and suddenly been kicking myself that I’d been so quick out of the traps, and considering floating off the old decals and replacing them with the new, high quality ones.
Now there’s no need -- just work out the wing engineering, put on that scheme of soft-edge greens, tan and grey, work up the yellow ID bands and apply the Aztecs -- perfect job (knock on wood, but I’m pretty confident!)


I was amazed by their variety, their exotic subjects, and the extremely high quality of both their in-depth research and their manufacture, and the great thing is you can order right off the website. I look forward to reviewing the application of Aztec decals in the not too distant future.
Jun 05, 15   •  By Aldo
Share     3 Comments